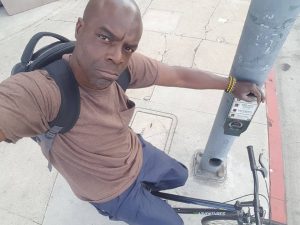 So who defines what it is to be black in America? Who defines what the black experience is and is this experience monolithic? If I am black but don’t have the prevailing agreed upon experience of oppression, does it mean I’m not really black?

Or does it mean THERE ARE MANY black experiences in this country. And I’ve said before, one day a segment of black folks who sympathize with my experience but who are presently not openly vocal about it are going to start speaking up.

JUST BECAUSE YOU ARE BLACK AND I AM TOO DON’T MAKE YOUR EXPERIENCE MINE! We ain’t all the same nor do we have the same perspective or opportunities.

its not just a job- it’s a job / education / class thing. my initial observation was too simplified.

Though it’s irritating being pulled over, the few times I have I either deserved it or I understood it as being a part of something. If I got to get pulled over maybe once or twice a year to deter pookie from being in my neighborhood doing what he do, I’m for it. And if the po-po wanna but a baton upside pookie’s cousin’s head for selling dope on my street, I ain’t mad at that either.

I realized the point I was trying to make yesterday was that in the publicized cases where police used deadly force on a black man it was NOT solely because the victims were black. Though that may have been a part, there is a social economic / class factor also.
Another thing, don’t equate you getting pulled over 5 years ago by a cop having a bad day with these police shootings. Those are two TOTALLY different situations in which things did or did not escalate to the point of gun play. That “escalation” is a major difference separates greatly how people interact with law enforcement. For the most part I can say y’all know better than to act out on police. “Class” means showing class in ALL situations. Now I’m not saying all police are good, as there are some bad ones, but for the overwhelming most part officers of the law are not out to get anybody but criminals.
<HR\>

the driving force behind the media is that this black male / police thing is the hot news and generates viewers and clicks. just like Trump, so many people are emotionally charged at these topics its the thing to talk about. and yes, the media is definitely fueling this thing. an officer killing a white male happens way more often but is simply not as newsworthy

Ok, cool. but you aren’t cool because I’m not as convinced as you are? and i ask questions?

XXX-I’m not cool because you seem to believe you’re exempt from being Black, and just what that means in this country. You’ve apparently let your success insulate and lull you into thinking ‘it could never happen to me’.

Uh, yeah. and you have convinced yourself that being black is the primary direct cause for all this and that it surely will happen to you. so who wins?

yeah, people die and things happen. there are 300 million of us here trying to do it together and there will be unintended casualties. its just part of life. some of us care more than others about it and its good we have such a diversity of opinion and disposition. we all should do what makes us happy

I can say that about you all’s experiences. Bad luck but not the prevailing situation

Again I am relaying to you my experience, that’s all I can do. I’ve always been treated mannerly and fairly and I’ve been arrested several times

I think many many more folks share my experience but are leery of sharing it because of the fear of being called coon and such. That’s all I’m doing and saying

this seems to becoming more and more apparent. there are many experiences of what it is to be black in america and therefore there are many ideas of what it is to be black in america. maybe the black america you living in ain’t the one im living in? is that possible? and you think because i aint down with your struggle (because i dont detect first hand experience of it) i should still protest “kill whitey” with you. i never been that guy no matter what the topic or cause. it seems many of you define and have a definite idea of what being black in america is and you are sticking to it, well maybe that in itself is “holding” black america back. as you awake every morning with a negative attitude, attitude or disillusioned by the system. a large part of where im at is due to the way i think. that goes for everybody across the board regarding just about anything.

of all the publicized police shootings of black men, i don’t recall hearing that any of the victims had a real job. and of course no, that doesn’t matter all, i was just wondering…

hat does a “job” have to do with getting shot in cold blood in the middle of the street because his car broke down? Are you on the Mothership or the Othership?
Like · Reply · 2 · Yesterday at 8:01pm
Jeffery Pure-Funk Mitchell
Jeffery Pure-Funk Mitchell Nothing, I just posed a question. Folks I know who have a good job are compliant and don’t resist arrest. That means must of the stuff that escalates a situation will not happen. I’m not referring to any given incident, but in general it seems to me a large percentage of these victims were in situations I know to avoid